Crater is a really nice, well polished, invoicing system that is open source, and can be self hosted.  I have struggled a bit to get this running, but with a couple of bug reports from the docker install side, I've gotten it to run.

In this tutorial, I'll show you how to get Crater up and running with little to no issues.  And show you the couple of small issues I've come across in my efforts to document the process for you.

For instance, you may want to answer 'y' to NGinX Proxy Manager, and Portainer-CE if you don't already use these in your system.

Create a "crater" folder inside the parent level "docker" folder.

Move into that folder, then clone the "crater" repository.
cd docker/crater

Now move into the newly cloned "crater" folder.  Your full directory path starting with the parent docker folder will look like docker/crater/crater

Next, we need to copy the example .env file, and modify it for our install.

The "." before our filename indicates that it's a hidden file.  So if you run just the ls command, you won't see these files. Instead you should run the ls -al command to see any hidden files / folders.

Open the new .env file in our text editor (nano).

Inside this file, you'll want to edit any values to match your network, system, or requirements.  Let's take a look at the file and it's contents.

In the above file, you should change the following values:

In my case, I just used the same domain for API_URL, SANCTUM_STATEFUL_DOMAINS, and SESSION_DOMAIN.  Most likely this will be the case for a home / small business user as well.

Again, let's look through the code block for items we need / want to modify.

In the above file, you'll want to change the DB_USERNAME, DB_PASSWORD, and DB_ROOT_PASSWORD to something different and more secure than the defaults before you open the system up to the world.   Additionally, you'll likely want to change the left side of the port mapping in the "nginx" block to something other than "80".  I used 8019.  This just keeps you from trying to use a port that is already in use on your host machine.  Leave the right side of the port mapping alone.  It needs to be "80".

Once we've made all needed modifications to the docker-compose.yml file, we can start our images pulling down / building with the command:

This will take a while, as it builds the application and container the first time you run it.  You'll want to give it a solid 15 to 20 minutes.

When it's all done running, we'll check that everything is up and running still witht he command:

You should see output similar to this if all is working properly:

Now we need to run a startup / first run script provided in the git repository, under the docker-compose folder.

You may see an error about plugins not being allowed. If you do, you'll need to make an addition to the composer.json file found in your crater folder from the git clone.

Open the file with our text editor (nano), and make the addition as stated below.

At the end of the composer.json file, change the "config" section to have "allow-plugins: true" in it.

Now re-run the "setup.sh" script from the "docker-compose " folder.

Now, you shoudl have a new Crater site up and running.

You may want to setup a reverse proxy to your site as well before you begin through the first run wizard.  If you intend to access your invoicing software from outside your network, or via a domain / subdomain, definitely consider the need for a reverse proxy entry.

i use NGinX Proxy Manager for my setup. The steps you need to take are:

A couple of items you may want are as follows:

Database address will be the container name of the Postgres database.

You can get the names by using a tool like Portainer, or by using the docker-compose ps command in the terminal.

Once through the wizard, explore the settings for Crater, and get the system customized to your needs. 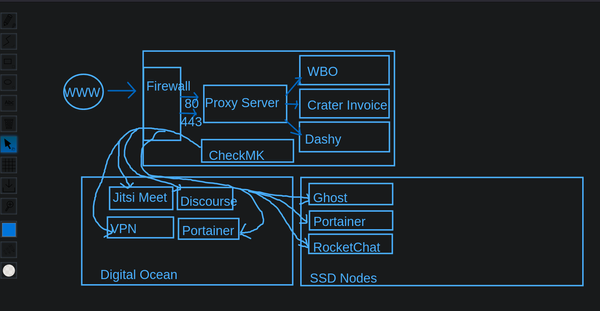